Have you just finished a padel match and still have energy? Why don’t you visit a nearby village? We have thought of a place that can be easily reached on foot, with a trekking path.

You have probably already understood what we are talking about: Cervo, one of the most beautiful villages in Italy.

The origins of Cervo

Archaeological evidence confirms that in the 6th century the village was occupied by a Byzantine settlement. We know that in this period, in fact, Liguria was affected by a series of important barbarian invasions that seriously threatened the economic and political stability of the territory. For this reason defensive structures were also built in Cervo, traces of which remain in a tower that was then incorporated into the more recent Clavesana castle.

During the Carolingian era Cervo was the object of pirate raids that forced the populations to take refuge in the hinterland. In the municipal period, which in the meantime fell under the control of Albenga, it declared itself an autonomous municipality under the protection of the Republic of Genoa. This, however, gave up the fief to the Knights of Malta in 1330. The Doria and Del Carretto families also contended for Cervo, since they had numerous interests there, but it was again Genoa that prevailed.

The sixteenth century was the century in which Cervo consolidated its position as a commercial center, increasing coral fishing to the point of making it one of its main activities. The earnings deriving from this traffic, in fact, provided Cervo with the resources to finance their baroque pearl: the Corallini church.

What to visit in Cervo

There are many medieval villages in Italy, but our favorite is just a few kilometers from home. Cervo overlooks the coast and can be reached by climbing a winding and not so steep road, flanked by our dear olive trees. During the journey it is impossible to look away from the sea, which attracts us with its intense blue color, without ever abandoning us. Once we reach the top, the village welcomes us in a stone embrace.

The Clavesana Castle and the Ethnographic Museum

The medieval Clavesana castle in Piazza Caterina now houses the Ethnographic Museum, which takes us back to the peasant life of the area with its nineteenth-century findings. From the museum begins the path inside the historic center. This opens onto a labyrinth of alleys that are worth visiting in order to admire the care of the old stone houses, with their gardens opened to the street with pots of flowers and plants. In the peaceful sharing of spaces of this small community, tourists are well liked, welcomed in their getting lost among the meshes of the village fabric.

The church of the Corallini

You will soon realize that in Cervo the real star is the church of San Giovanni Battista, known as the Corallini. You must have seen it along the Aurelia: it is impossible not to notice it. Its Baroque façade, designed by Giobatta and Filippo Marvaldi between the 17th and 18th centuries, is considered among the most beautiful ones in Liguria. The dedication with which hundreds of tourists stop in the square every year to admire it and enjoy the view, taking numerous photographs and selfies, is a clear proof of this.

Seat of the Town Hall, this seventeenth-century palace was once the residence of the senator of the Republic of Genoa Falcone Morchio, whose family was originally of the village since the thirteenth century. Narrow and elongated, it stands out for its gallery and the beautiful slate portal.

Built by the Knights Hospitallers during the 13th century in a Romanesque style, the Oratory was elected by the people of Cervo as parish church in 1505. On that occasion, the expansion works were carried out to adapt the small building of worship to new needs. More recent recovery interventions have made it possible to restore its original appearance. Currently deconsecrated, the building is now used for exhibitions and cultural activities.

A few kilometers from our apartments in Andora you will find Cervo. Here you will be catapulted into a charming village, where you can get lost in its mysterious alleyways. 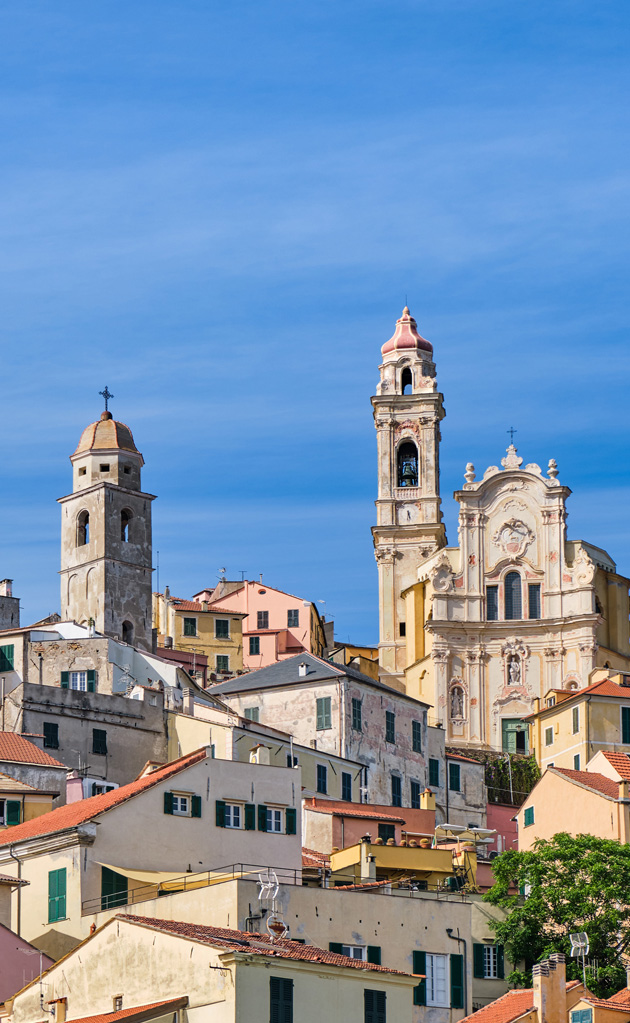