Holiday in Andora? Choose an apartment, book and enjoy your holiday on the sandy beaches of the Western Ligurian Riviera. Sun, sea, fun and entertainment. And if you are a sportsman or you are simply curious to try something new, you will find what it is right for you.

Between a swim in the sea and a swim in the pool, you can organize a tennis or padel match with friends and beach umbrella neighbours. It is not necessary to take the car, the fields are near the sea, so in the beach bag you can easily slip a padel or tennis racket, to keep fit or to have fun with an activity you have not tried yet.

Padel is a racket sport that in recent years has seen a significant growth; recently dozens of new Padel courts were born in Italy. The reasons for its spread are simple: it is a discipline that everyone can practice, it can be played both outdoors and indoors and its rules are very similar to those of tennis.

A little bit of history

At the end of the 1960s in Mexico, the tycoon Enrique Corcuera, due to insufficient space to build a tennis court on his estate, decided to turn the limit of masonry walls into a new possibility. In fact, padel is played between four walls, in a smaller court than the tennis one. It measures only 10m x 20m.

From that moment on, the spread of the “cousin sport” of tennis did not stop. At first it became popular in Latin America and Spain, and then it conquered the world. Just to give an idea of ​​its success, padel is the first sport practiced in Argentina and the second in Spain. Today padel is played in 32 countries: it is a sport that suits everyone, all physiques, ages and habits.

It is played in teams of two people, so for each match we consider a total of four people.

The padel court looks like a tennis court but with the difference that on all four sides the field is closed by walls that allow the ball to bounce. The two playing areas are separated in the center by a net. According to the official rules, it is always played in pairs. The playing balls are identical to those of tennis. The racket is a “shovel” of maximum 45.5 cm long that has no strings but only a few holes in its central part. In addition, the racket must be tied to the player’s wrist.

In padel the scores work as in the traditional and better-known tennis..

The service opens every new game. It must be done behind the serve line and has the aim to bounce off the opponent’s court or touch one of the walls in the opponent’s playing area. Remember that the ball can only touch the racket, the court and the walls.

You score when the ball hits the walls of the opponents’ field, when it hits the metal net or if it bounces twice on the ground.

How to choose a padel racket?

Bearing in mind that each person is unique, it is recommended to adapt the racquet to one’s build, style of play and skill level. A beginner definitely needs to differentiate himself from an experienced player.

On the market you will find rackets of various shapes and types. The main recommendation is not to confuse them with tennis ones.

Round, diamond or tear drop? The best racquet must adapt to the style of play.

Round: for those approaching padel for the first time it is recommended to choose a round-shaped racquet that is more manageable and allows greater control in the explosion of shots. When starting or trying your skills in a padel court, a better handling also means learning the correct setting and grip. Pay attention to heavy racquets that are not suitable for beginners.

Tear drop: have you already acquired the right technique and are you capable of control but still missing something? The teardrop racquet model can meet your needs, allowing you to find the perfect balance between power and control.

Diamond: for padel veterans who have already made their opponents eat the dust, the diamond-shaped rackets are unbeatable. The head of the racket is more flattened than the other two models and its weight, shifted forward, gives the shots more power.

Now that you know everything about padel you are ready to play your game in our brand new padel court in Andora. 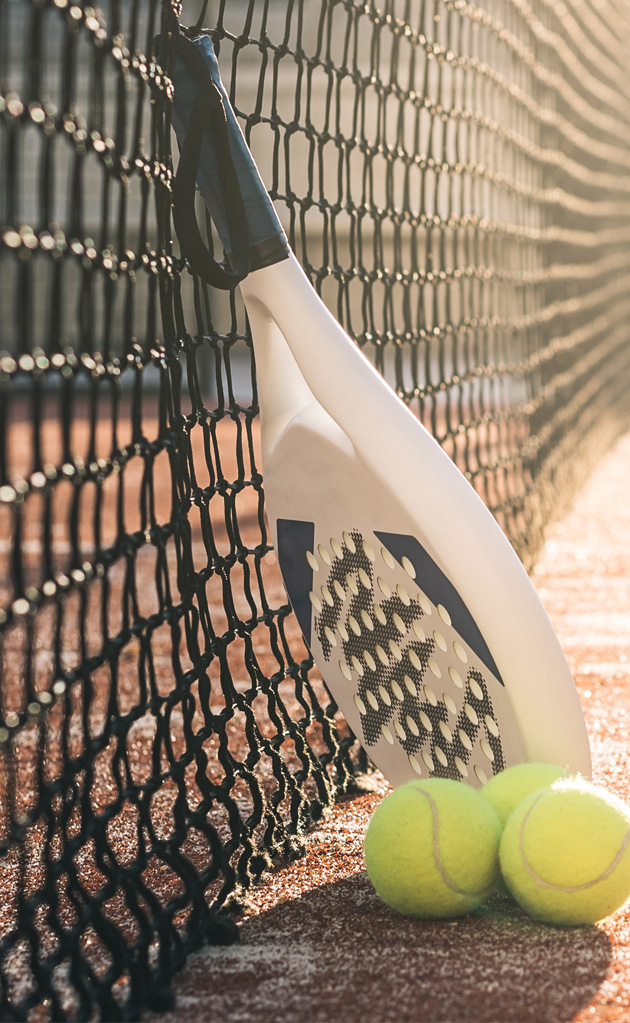