What to see in Alassio

Home > Surroundings > What to see in Alassio

It is fortunate that Alassio is so close to our tennis courts in Andora. After a healthy workout, in fact, there is nothing better than taking a walk in the “Budello” of Alassio, where you can find both the best sports shops in the area and the most elegant clubs.

In addition to shopping and the delicious Baci di Alassio you can taste at the bar with a good coffee, there are places you have to absolutely visit. Only then you can claim to know one of the most refined towns of the Riviera di Ponente!

The history of Alassio in brief

Alassio was founded around the X-XI century. In this period, in fact, we have news of a burgum Alaxii, an inhabited nucleus on the hill, belonging to the Benedictine monks of Gallinara Island. From 1303 the village was ceded by the monks to the municipality of Albenga who administered it until the sixteenth century.

Alassio also underwent several pirate raids during the sixteenth century, which forced it to equip itself with defensive walls. Falling under the control of the Republic of Genoa, it participated in the war against France in 1528. Its wealth in this period was determined by becoming an important center of trade with Spain, Portugal, the Netherlands, Sicily and Sardinia, also thanks to fishing and coral harvesting.

In 1625 Alassio was temporarily occupied by the Savoy troops due to the hostility between Genoa and the Dukes of Savoy.

Points of Interest in Alassio

Alassio is a town you can discover on foot, letting yourself be enchanted by the numerous elegant Art Nouveau buildings, the shops and the seaside promenade along the historic center. Surely, you cannot leave Alassio without stepping on the soft sand of its beach. Here, in fact, there is one of the most beautiful beaches in Liguria. Furthermore, right by the sea, you will see the ancient towers, military sighting structures built by the Republic of Genoa to contain the attacks of the Saracen pirates.

On the other hand, you are a few steps from the historic center, where the “Budello” winds. This is the main alley, the place where you can give vent to the wildest shopping, or stock up on typical products in small traditional shops. In addition to pesto, trofie and the inevitable focaccia, do not miss the Baci di Alassio: delicious hazelnut biscuits with a chocolate core!

The wall of Alassio

You cannot claim to have been to Alassio if you do not take at least one photo in front of its famous wall. There are hundreds of colored ceramic tiles hung over the years, each with different designs and messages, signed by famous people from sports, music and entertainment. The first to put his tile was Hemingway, invited by his friend Mario Berrino, owner of Caffè Roma. Today on the wall you can see a bronze sculpture depicting two lovers, now a symbol of Alassio.

Art lovers will be then intrigued by a small surprise in via Gramsci, not far from the historic Grand Hotel. Inside the Palazzo Morteo, in fact, you can visit the Carlo Levi Art Gallery, which houses twenty-two paintings, but also letters and photographs by the well-known anti-fascist writer and politician. Carlo Levi used to spend the summer in Alassio, and it was here that he created these works.

Another stop you cannot miss if you love painting is the Richard West Memorial Gallery in Viale Hanbury. Here there are 76 paintings that the Irish painter dedicated to the Alassian landscape. In addition to allowing us a wonderful journey through time, these paintings also provide us with a testimony of the fascination that Alassio aroused in the English population at the end of the nineteenth century.

Villa della Pergola is one of the indisputable treasures of Alassio. With its over 22,000 square meters of garden, it stands out on a green hill that opens onto the gulf. Fountains, ponds, very rare and fragrant plants: it is one of the few English gardens in Italy, built in 1875 by the Scottish general William Montagu Scott Mc Murdo.

The property then passed to Virginia Woolf’s cousin, the baronet Sir Walter Hamilton Darlymple. In 1922 the park was bought by Daniel Hanbury, son of the famous owner of the Hanbury Gardens in Ventimiglia. What remains of the taste of this famous family is above all the scent of wisteria, which they particularly loved, to the point of cultivating 32 varieties, and giving life, every year in April, to a Wisteria Party.

But of course, there are many species of plants that you can also admire: almond trees, holm oaks, jacarandas, eucalyptus, coming from all over the world.

The chapel of the fallen in the sea

Finally, we want to offer you a romantic route to the chapel of the fallen in the sea, perched on the rocks near the tourist port of Alassio. To visit it, just take a walk along the seafront, where some seagulls and a few daring fishermen will keep you company.

We advise you to enjoy it at sunset: the fiery colors that reverberate on the sea will represent one of the best memories of your holiday!

As you have seen, Alassio is not just shopping and sea. It is a place rich in culture, art and poetry, just a few kilometers from our Sporting Pinamare di Andora. 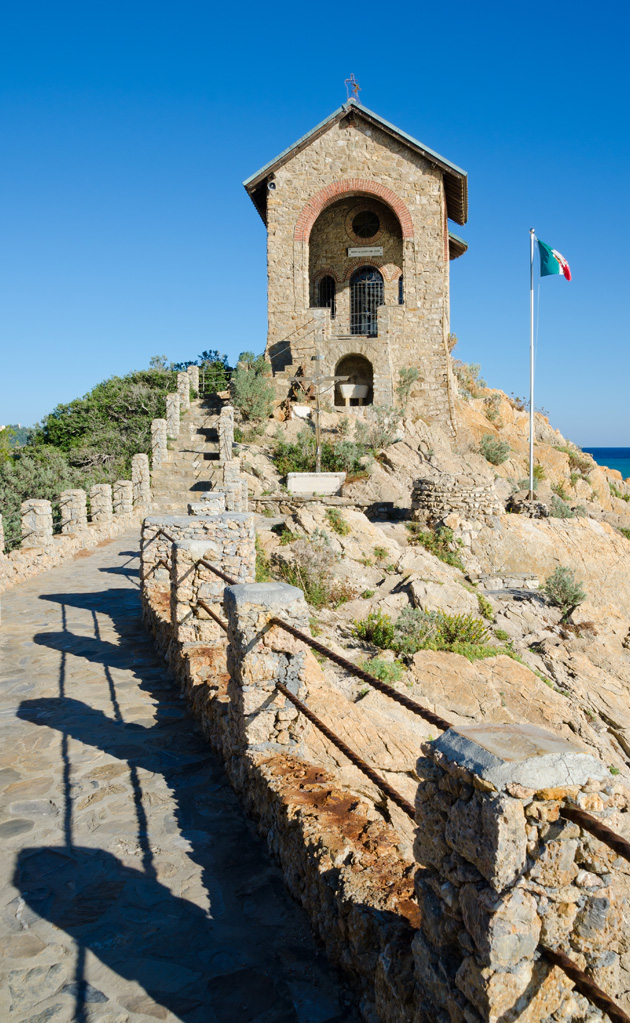